HOW IT ALL BEGAN

On retiring from a career in the Post Office, and moving to Royston in 1978 Edwin (Gary) Grimaldi was horrified to find that there was nothing going on in the art scene here. Having had experience in setting up art exhibitions for the GPO in Britain and Europe, Gary advertised for like minded people, with a view to encouraging aspiring artists in the town. Sylvia Jordan and Harold Perrett were the only ones to respond initially, but they soon gathered a small group together and Mrs Jordan offered her home as a venue for classes. The Society became official in 1979, with the grand total of 24 members. The following year the group had grown to 52 members, and the first Exhibition was held, showing 300 paintings. The Preview was attended by 60 invited guests and opened by Mayor Mrs Pat Rule.

Norman Taylor joined the Society soon after its formation, and Gary and Norman became the leading lights. They undertook the huge job of making our exhibition screens themselves. Gary and Norman, ably assisted by their equally talented wives Joyce and Lilian, built up the Society and steered it through the early years to its present popularity and eminence in the town. As many past members will know, their relationship was not always harmonious, but we have both Gary and Norman to thank for laying the foundations of the Society we have today.

THE END OF AN ERA

The death of Norman Taylor in 1997, and our President and Founder Edwin (Gary) Grimaldi in 2001 brought to an end the first episode in the history of the Royston Arts Society.

In 2003 we celebrated 25 years with a trip to Winsor and Newton, and Harrow School, and a 25th Anniversary Dinner at the Old Bull Inn, Royston

Evening painting sessions became less well attended, and it was decided to change to afternoon sessions on Tuesdays. This proved to be a huge success, and by 2008 numbers attending had grown so large that in spite of using the Committee Room and Room 11, we were cramped for space. The Market Hill Rooms had just been refurbished, and proved to be just what we needed. A spacious and well lit hall, and a large kitchen which also gives us room for a good sized store cupboard.
Since 2014 the Annual General meeting and the Demonstrations have also been held in the Market Hill Rooms. There on the second Friday evening of most months members continue to enjoy demonstrations by a variety of artists in various media.

The Annual Exhibition Goes From Strength To Strength

The outdoor exhibition which used to be held in Church Lane was eventually abandoned after several years of bad weather. However, the Annual Exhibition, held since the second year of the formation of the Society, has evolved into a prestigious event in the Royston calendar and a key event in Royston Arts Festival. For people who enjoy painting 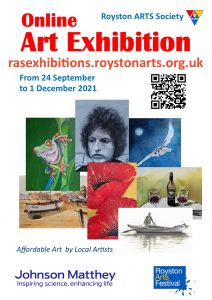 Thank you to our Autumn Exhibition sponsors listed below.